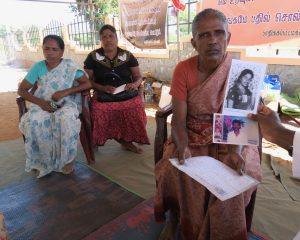 Kitnapilai Rasmani and holding photos of her two children both of whom have disappeared, Mullaitivu. Her son was an LTTE cadre, he was injured and taken by the ICRC to hospital. Her son managed to get a letter written by friends (He could not write) sent to her, giving details where he was recovering. Five days after receiving the letter she went to the hospital, but told her son had been moved to another government camp to make way for new casualties. No news after that. Her daughter was at school, but then forcibly recruited by LTTE as a cadre in the closing stages of the war. No news after that.

We have been travelling around the north of Sri Lanka, among the areas that were formerly controlled by the LTTE (the Tamil Tigers). Universally, people express relief and joy that the fighting is over, but there is still much to happen to win the peace.

An issue that some of our Anglican colleagues are actively supporting is the plight of those who desperately seek news of relatives who have been missing since the end of the war. 20,000 people are believed to have “disappeared”, and nearly eight years after war ended, their parents do not know whether they should grieve, or hold on to that glimmer of hope that their loved ones are alive.

Two presidential commissions were set up to inquire into the missing, but a man who has worked with one of the commissions told us: “We failed to get information for a single one of those who had disappeared.” The lack of progress is now leading to protests which are bubbling up all over former LTTE areas. We were accompanied to two such protests in Kilinochchi and Mulaitivu, by local clergy.

The protests take the form of sit-ins beneath simple roadside shelters where photographs of the missing, all young faces, adorn the makeshift walls. The relatives keep a dignified vigil, taking turns to ensure that there is a continuous presence. We heard numerous individual stories. Most disappearances took place at the closing stages of the war. All except one of the former LTTE cadres we heard about voluntarily surrendered themselves into Sri Lankan Army custody, and were not heard from again. A significant number disappeared from hospitals where they were receiving treatment.

People contend that large areas of land remain out of bounds to the public, and that this is where the are secret camps are suspected. This is supported by fleeting film footage from from documentaries, such as that made by Channel 4, that have provided tantalising glimpses of some who have disappeared.

Eight years on, and with a less authoritarian government having been elected two years ago, there are others we have spoken with who doubt the existence of such camps. They highlight that covert arrest and detention has regrettably been a method of enforcement of authority and control in recent decades, and not just in 2009 as the civil war was ending. Forty years on for instance, there are many Sinhalese who are grieving for relatives who were abducted during the JVP uprising in the south, and never returned.

What the relatives want is to be treated with honesty and dignity. After so many years of violence perpetrated by both sides, it is hardly surprising that beneath the light-hearted smiles, huge bitterness and mistrust continue to exist. Could a new solidarity be fostered, between grieving relatives of the disappeared from both Sinhala and Tamil communities, to force a new era of openness from the Government?

If this conflict feels remote to our lives in Britain, creating a creative harmonious community remains an ever-present challenge for all of us. Fundamentally, it can only take place when we treat each with other dignity and respect.

Please keep the ministry work of clergy in these former war torn areas in your prayers, as well as the patient vigil of the relatives of the disappeared.